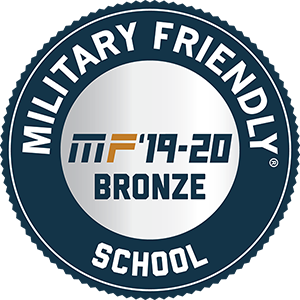 North Shore Community College (NSCC) has been elevated to bronze status with its ninth consecutive designation as a Military Friendly School by the national organization VIQTORY, the premier media entity for military personnel transitioning into civilian life. The designation honors the top 20 percent of colleges, universities and trade schools that are doing the most to embrace America’s military service members and veterans as students.

Institutions earning the Military Friendly® School designation were evaluated using both public data sources and responses from a proprietary survey completed by the school. This year 766 schools nationwide earned this prestigious designation.

“We are thrilled to receive an upgraded rank this year. This coveted designation very publicly illustrates NSCC’s commitment to serving veterans and their families,” said NSCC President Patricia A. Gentile. “NSCC has a long tradition of providing education and training to veterans and current members of the armed forces who are seeking to learn new skills and translate experience in the military to civilian life. We are committed to providing the highest quality services, resources and programs to meet the unique needs of this vital and growing student population,” she said.

For more information on what NSCC can offer to members of the military or veterans, contact Kristine Babcock, Veteran’s Services Coordinator, at kbabcock@northshore.edu or 978-762-4178.