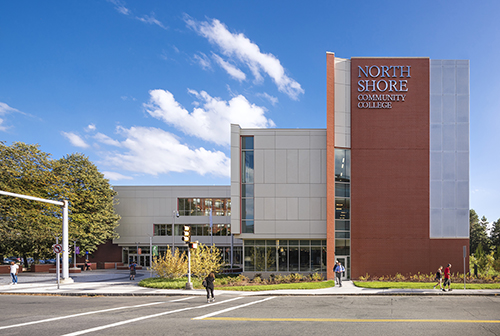 LYNN — Despite the usual bumps that come with creating a brand new school, the city’s Early College High School program, which sends a cohort of Lynn Public Schools students to North Shore Community College’s campus to take high school and early college courses, is well on its way to being a success, Principal Heather Fabiano said Friday.

Classes at the school began Wednesday with more than 90 students from the city’s middle schools in attendance for their freshman year of high school. The ECHS is the first of its kind in the state to be completely located on a college campus, as students take most of their classes at NSCC’s modular buildings. However, art, science lab, and Understanding Higher Education courses are held in the college, and students eat lunch there as well.

Fabiano, a former vice principal at Lynn English, said the school has begun to coalesce over its first few days.

“It really came together, and it really started well,  like anything that is new, we’re going to learn a little bit as we go, but I gotta be honest, I think it went pretty well the first couple of days,” she said in a telephone interview Friday. “I’m actually very impressed by the students and their adjustment to it.”

That adjustment, Fabiano said, includes adapting to school inside what is essentially a brand new building and environment for students.

“They’re coming to a building that no one has ever kind of been in before … so it’s definitely a new experience, and we’re putting them on a college campus where it’s not just LPS. There’s also North Shore Community College students that are on campus taking classes and so what is an adjustment for them is the transition between only being LPS and kind of having almost like that safety net of being in the building and kind of having a little bit more uncertainty in the sense of it being a college campus also,” Fabiano said.

Fabiano said with the majority of classes being held in the modulars, ECHS has been able to create a semblance of a typical environment.

“The setup that we have going is really great in the sense that their LPS classes, they’re going to be taking in the modulars. So they’re spending the majority of their day in an LPS environment on the campus, and then they’ll have their two college classes … in the McGee building, so they’re also getting a taste of what it’s like to be a college student,” Fabiano said. “Instead of moving to a traditional high school from classroom to classroom. They almost get a taste of both.”

Admission to the program was determined via a lottery system, first open to only students at Thurgood Marshall Middle School, then eventually expanding to Pickering Middle School and the Discovery Program at Tech, Fabiano said. Former Superintendent of Schools Dr. Patrick Tutweiler told The Item in April that participating freshmen would otherwise be going to English.

Fabiano said reactions from students and parents have been overwhelmingly positive following the first three days of classes, with one student telling her “all the teachers were so nice” and a parent who told her his daughter had a great first day and was loving it.

“I’m hearing good feedback. A lot of the students are happy about the lunches. The fact that lunch is only up to 50 students instead of the big amount that it is at Lynn English High School. So I’m hearing positive stuff about that,” Fabiano said. “We’ve only been here for three days, but so far, so good.”

The launch of the program has not been without its faults though, Fabiano said, noting that scheduling has been a challenge across the first few days of classes.

“Just trying to figure out scheduling, trying to make sure that we have the students in classes that are what they need. We have a very structured schedule because we only have freshmen so we don’t have a lot of course offerings. And then just making sure that we have our classes staffed, which, we’re lucky that we do,” she said. The district’s aim is to add at least 100 students to the program each year for the next four years, Fabiano said, noting that to do so ECHS would need additional space at NSCC.

Despite the challenges that come with launching a new school, Fabiano said she was motivated to leave English in part because of the unique opportunities ECHS presents to its students.

“This has the potential to be a really amazing situation for students in Lynn,” she said. “I don’t want it to be a program that is geared towards one demographic or one group of students. I want it to be something that’s accessible to whoever kind of wants to take advantage of it. And so I look at it like this as an opportunity for students to have a safety net of high school still to be able to kind of test the waters of college and see if it’s really for them or not.”

“This is a way of kind of testing the waters without necessarily having to commit a year of your life or financially to it. Our students get to see if college is something that they want to do, or maybe they didn’t think that they were academically able to do. And with this safety net, they can test that water and see that ‘yeah it is something that I can do or maybe that I really actually want to do now,’” she continued.

Fabiano said she was looking forward to seeing how ECHS continues to evolve through the rest of the school year.

“We had a stressful but very successful opening first three days and I’m just excited about how it’s going to continue as we get into the routine of school, we have a great group of kids, they seem very eager, and I’m really excited about you know what the potential can be for this. But I don’t think I could ask for a better start,” she said.