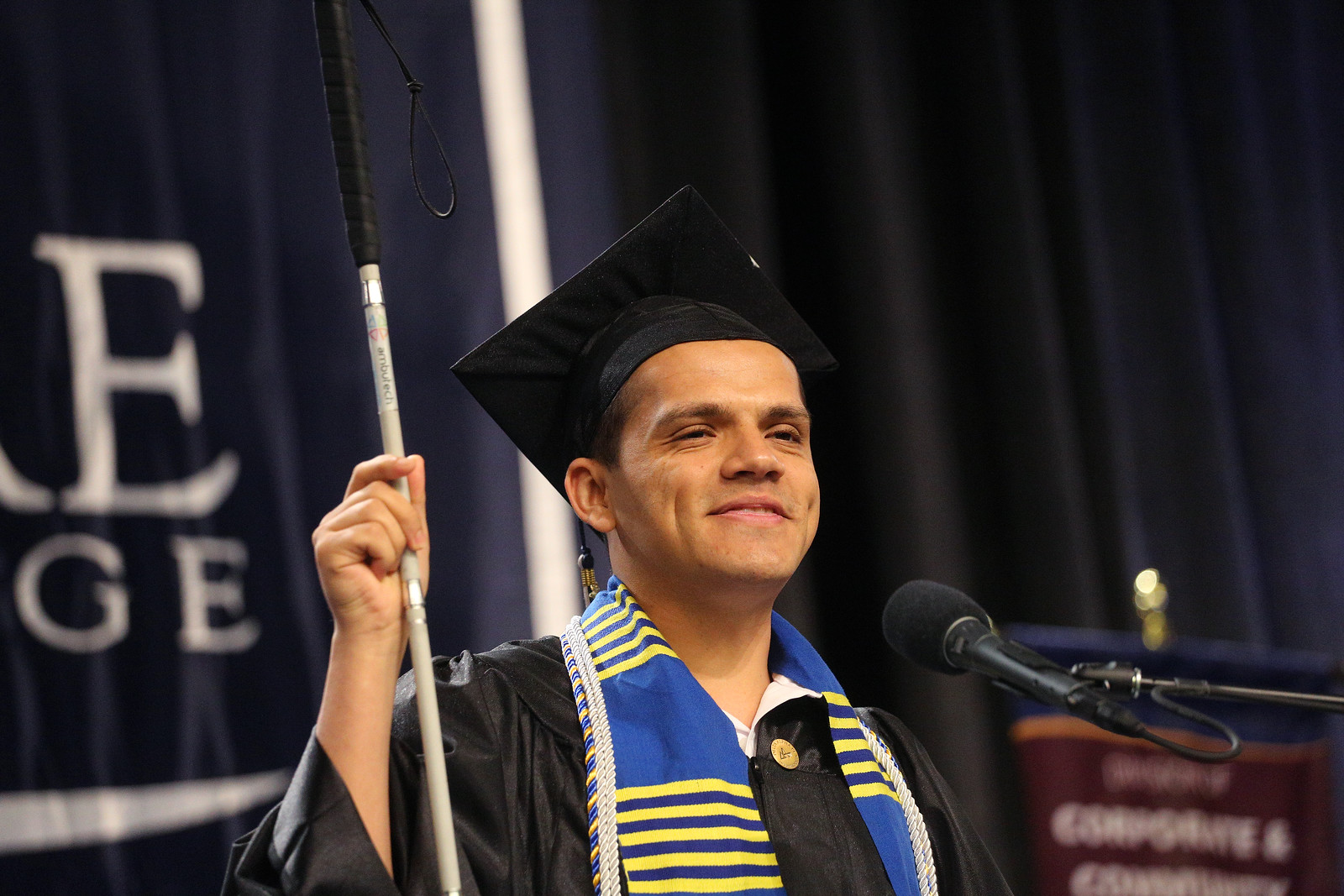 LYNN — Dany Acosta’s life drastically changed in 2014 when he found out he had kidney failure, which led to a stroke, two seizures, 19 surgeries in seven months, 13 hospitalizations, and him becoming fully blind.

His eyeballs had to be removed because of the chronic pain and pressure, and he had to relearn how to walk, eat and live as a blind man.

“I was three years sober when it happened… But before all of this chaos in 2014, I was completely sighted, didn’t have any health issues that I knew about, and didn’t even need glasses,” Acosta said.

Acosta eventually got a kidney transplant, and after everything that happened to him, he never gave up.

Now, at the age of 30, he has published his first book, graduated from North Shore Community College (NSCC) with a 3.94 GPA, graduated from Salem State University (SSU) in 2021 with a degree in social work and a 3.91 GPA, and is beginning his Masters for Social Work from SSU in May. He also gave the commencement speeches at both NSCC and SSU graduations.

“I may not have sight, but I have vision for life,” Acosta said.

In 2015, Acosta went to the Carroll Center for the Blind, in Newton, where he learned how to type. He is now able to type on his computer and uses a screen-reading app called JAWS to assist him.

After learning how to do this, Acosta began writing poems in 2015. The book he recently published, called “Blindly Painting Words of Love,” is made up of the poems he wrote over the years.

“Most, if not all, of the poems in this book were written at a dialysis center in Peabody,” Acosta said. “A lot of them were written during my battle with chronic kidney failure.”

Acosta has published poems in magazines before, but this is his first published book.

Before losing his sight, Acosta was a mural artist, but has since adjusted his form of art into words and poetry.

“I used to write my name —my graffiti name — on people’s walls, but now my goal is to write words of love on people’s hearts,” Acosta said. “I used to paint words, but now I paint using words.”

When writing his poems, Acosta thought of how he could bring love into people’s lives and promote self-love.

His favorite parts about his book are the cover and the titles to the book and the poems.

“Some of the titles take you out of this world, but they help you kind of connect back to the world, like ‘Writing in Chalk on Saturn’s Rings,'” Acosta said. “You’re thinking of the planet, but then you’re also thinking of your childhood in a way. The goal was to connect the reader every single time back to a memory.”

Acosta is hosting a gala to celebrate the release of his book on Friday at 7 p.m. at the Iglesia De Dios De La Profecía, which is the old St. Michael’s Hall.

With people having to miss proms, galas, and social events over the past two years because of the pandemic, Acosta said this is an opportunity for people to get dressed up, go all out, and celebrate together as a community.

“This community has helped me out so much in so many ways that I can’t even begin to count,” Acosta said. “I wanted to give back to my own community. This is a community that cheered me on when I was doing my associate’s (and) my bachelor’s, and they continue to cheer me on.”

Acosta has spent years giving back and helping out his community.

He currently works at Centerboard as a mentorship coordinator where he most recently helped to establish an Empowerment Scholarship, which doesn’t depend on immigration status, to assist students with paying for higher education.

“I want to make accessibility available to everyone,” Acosta said.

Acosta also advocated for accessibility during his time at SSU.

The school of social work isn’t very close to the main campuses at SSU, so Acosta advocated to get the shuttle to stop at the social-work building, which became successful after a year of obtaining signatures and attending meetings with university leaders.

He also successfully advocated to make all of the shuttles handicap accessible, after witnessing the difficulty his friend in a wheelchair faced on campus, making sure that everyone can have access to every building no matter what.

“I love the fact that it took a blind person to restore vision to the school,” Acosta said.

Acosta not only plans to continue advocating for equality and accessibility, but is also planning to write at least three more books, including one about his story of losing his sight.

For anyone interested in attending the gala or learning more about the book, email dacostag12@gmail.com.

“Blindly Painting Words of Love,” can be purchased on Amazon in English and Spanish and is available via eBook.