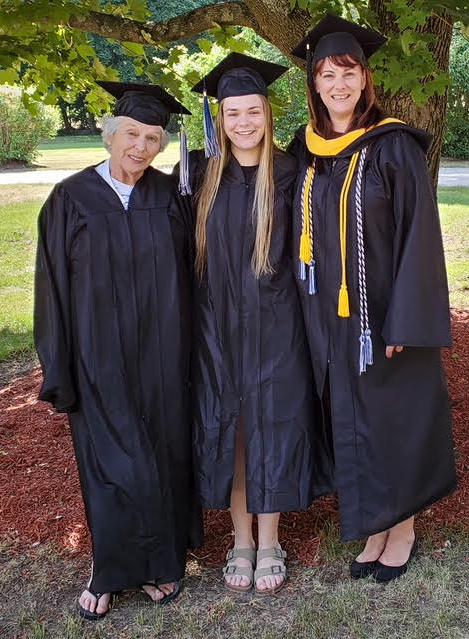 When Vittoria Forte “walks across the stage” at North Shore Community College’s (NSCC) first ever virtual commencement on June 25 at 6 p.m., she will be the third generation in her family, all from Chelmsford, to receive an allied health degree from NSCC.

Jennifer undoubtedly got the idea from her mom, Sherrill DiPietro, who at the age of 50 decided to attend NSCC to study gerontology. “After raising my family I felt I wanted to work in health care, particularly with the elderly.” Before she even graduated, her internship at an assisted living facility turned into a job there as the Director of Social Welfare. She later went on to become the director of a nursing home in Lexington.

“Going to school later in life surprisingly wasn’t as difficult as I thought it was going to be. Almost all my classmates were younger, but they were great to learn with. I was not made to feel out of place. My experience at NSCC was great,” DiPietro said.

Jennifer, too, found herself drawn to health care. “Surgery is just so fascinating. We get to see things that no one else does. I was also a little apprehensive about being an older student, but had a great experience.”

Two years after she graduated, the then director of the surgical technology program brought students to her place of employment for a site visit and offered her the opportunity to work at NSCC in the surg tech lab. That was when the program was still located at the Essex Agricultural High School. “The lab was literally a closet that had been converted to a lab. When I got the job as the director of the program, it was just as we were moving into the new Health Professions and Student Services building on the Danvers campus. It was truly the difference between night and day and now our students get to learn in a state-of-the-art surgical suite.”

Vittoria already has her CNA certification and is working in an assisting living facility but wanted to enhance her skills so enrolled at NSCC to study medical assisting. “I knew from my gram and mom that I would have a good experience there so there was really no question of where I would go to school. I look forward to getting a job in a doctor’s office as a medical assistant after graduation,” she added.

NSCC’s 54th commencement will begin with a 5:30 p.m. pre-show then begins at 6 p.m. and can be accessed at www.northshore.edu/commencement.